AN INTERVIEW WITH MY DAD, WHO HAS DIABETES AND HEART DISEASE

It is a big honor for me to introduce my father for my first interview blog post. It is timely that our blog got set up a day after Father’s Day. I love you, Dad. Thank you for being a hard worker and amazing role model, and for sharing your thoughts, faith and ideals with me. You are an inspiration to so many people, and this post will help you inspire many more. 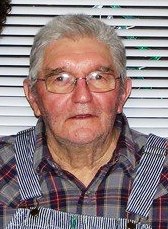 INTERVIEW BLOG #1: My dad, Kenneth, who has a history of diabetes and heart disease

Aside from serving two years in the Army in Korea, my dad spent his whole life on a farm. Now 83 years old, he and my mom finally retired from helping with the dairy last summer, and moved to town. Who would have guessed that the hard work of farming and milking 100+ cows twice a day would become a key factor in my father reaching his golden years. And that I would have the great privilege of interviewing him for my first Outlook on Life blog.

In 1979, the year he turned 50, my dad started noticing that he had an unquenchable thirst. My parents had taken up square dancing to help them cope as a couple with the grief of losing my little sister to cancer some years earlier. It was while driving their friends home from a square dance that Dad realized he had drank an entire two liter bottle of pop and was still thirsty. He was also experiencing a lot of pain in his hands, and had trouble tying his shoes. That September he was diagnosed with type 2 diabetes.

With treatment of pills and diet (insulin in 1988), the thirst went away but the pain got worse with time, until it eventually succumbed to numbness. Foot neuropathy, compounded by the effects of two small strokes, is one of the more difficult hindrances to Dad’s staying active these days. But my mom, who refuses to let anything stop her, also refuses to let Dad stop moving. And thus, while square dancing long been a thing of the past, they still get out and attend events they enjoy.

It was in his 50’s that Dad also developed Coronary Artery Disease. CAD and diabetes are a fairly common marriage, but not the type of pair you want to have around. Several stents, a couple of mild heart attacks, and a quadruple bypass later, we half expect Dad to start growing cat whiskers, and hope that his nine lives keep him around a good long while yet.

When I asked Dad what he would have done differently in regard to his diabetes, he said he would have tried harder to follow his diet. He is passionate for others to avoid some of the troubles his diabetes has brought him. His advice: Do what your doctor says. Don’t give up, fight your diabetes! Learn something about diabetes and your body at the same time. You can prolong and enjoy your life, just in a different way.

When asked what he did right, Dad said that he would have been dead years ago if he had not stayed on the farm, keeping active doing the work he knew and enjoyed.

How has your health affected your outlook on life? I asked Dad. He chuckled, I can’t tell anyone in the family that I’m going to die, because they say, What else is new? Then he got teary eyed as he recalled how his first heart attack hit him about the same age that his dad was when he died of a heart attack. That was about 20 years ago, and Dad said he remembers being out on a combine with my brother one day that year, thinking he would never see another crop. But they weren’t tears of sadness, he said, because his faith has given his life its meaning, and being at home with the Lord in heaven is something he anticipates with joy.

As his eldest daughter, I can say that we all have learned through Dad’s health that no one knows the future. Every time he has pulled through something, our entire family is grateful for the extra time with him on earth. As he puts it, Don’t be sad; take the warnings in life and go on living.

In summary, Dad stated that Diabetes is a serious disease, to which Mom added, But you can live with it, and Dad wholeheartedly agreed. Somehow that tandem response tells me a lot about how my parents have dealt with not just diabetes, but all of life’s challenges. They are a team, and their faith and family are foremost considerations in how they live.

Whether you have diabetes, heart disease, or just need a little inspiration, I hope you heed my dad’s warnings, then just go on living.